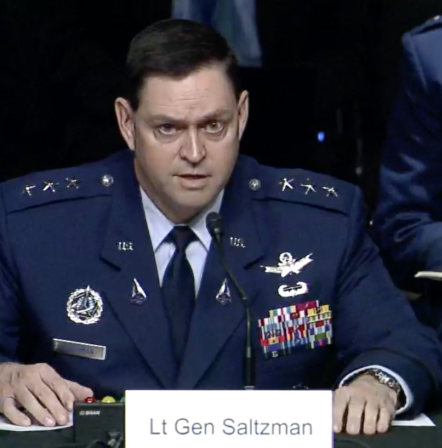 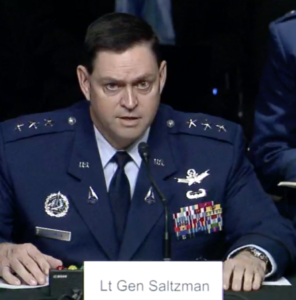 most of the attention in Space Force-related news this week as he sat for a nomination hearing last Tuesday, but Guardians and private-sector partners were taking care of business as well. We’ve got stories of a pair of Guardians who performed lifesaving CPR on a fellow servicemember, a revolutionary desalinization project to be based at Vandenberg SFB and the new Space Force museum exhibit – and more in this week’s USSF news…

Lt. Gen. Saltzman sat before the hearing for just over 90 minutes, answering the typical range of questions on the Space Force and its operations. The hearing was quite revealing of the Lt. General’s philosophy and plans for the USSF – and was also a handy Rorschach test for the various mainstream and military media outlets covering the hearing.

The entire hearing may be seen in the embed below. Choice quotes for Lt. Gen. Saltzman included:

Lt. Gen. Saltzman is currently serving as deputy chief of space operations for operations, cyber and nuclear within the Space Force.

An engineering project in its conceptual stages rarely gets headlines – even on a news site’s science pages – but the proposed water-purifying project to be based off the California coast is no ordinary idea.

To address the needs of Vandenberg Space Force Base and South San Luis Obispo County, the Ocean Portal Water Co. has designed an eco-friendly desalinization buoy which would produce over 300 million gallons of freshwater annually. The company plans to build the system offshore of the now-disused Space Launch Complex 1.

Though the company has yet to break ground on the project, Ocean Portal Water Co. president told media this week that the buoy could be up and running in 2025.

Vandenberg SFB leadership has affirmed their support for the project, as its need in drought-stricken California is particularly critical. The Government Accountability Office (GAO) reported in 2019 that the water supply at Vandenberg is the most at-risk among US bases.

Ken Domako, chief of portfolio optimization at Vandenberg SFB, told local meda, “Water is essential for mission-critical and support activities, and reliability of this new water supply has the potential to substantially backstop our current drought-prone sources.”

On Tuesday, September 13, Avenetti and Hayden were about to oversee a PT test when they heard calls for a defibrillator. They restored the cardiac arrest victim’s heartbeat with the defibrillator, she became responsive again and medics attended to her.

“It was only about a week prior to this incident that we had both become fully certified as [Physical Training Leaders] by completing the required first aid and CPR training,” Avenetti said afterward. “I was always comfortable with first aid, but the PTL training fundamentally gave me a lot more confidence with an AED. A majority of my knowledge on how to use it directly came from the PTL training.”

Advised Aventti: “Always be prepared. You never know if you’ll find yourself in a situation like this and if it happens to you, it’ll reinforce the importance of always having the right equipment and the proper training.”

At the National Museum for the Air Force, the 75th anniversary of the USAF was observed this past weekend with various exhibits and activities. This included the launch of the Space Force-themed interactive science exhibit “Above and Beyond,” which is billed as about “exploring transformative innovations in aerospace.”

The 500-square meter exhibition is touted as offering “an unprecedented interactive demonstration of advances in aviation and aerospace, from the first powered flights to the newest innovations on Earth and in space.”

Click here for an interview with museum curator Doug Lantry on the exhibits; directly below runs the teaser preview released by the museum in July.