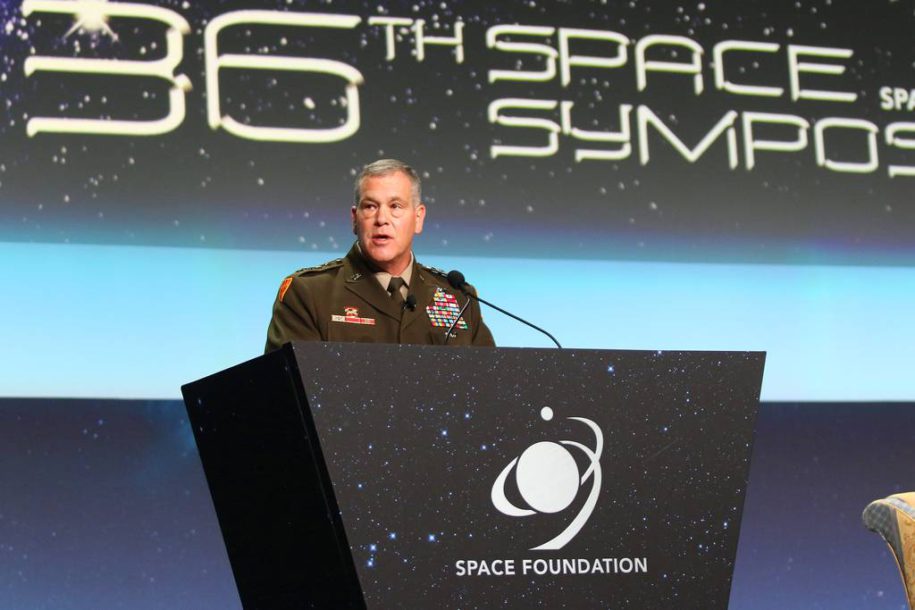 As international news was dominated by reports of Russian troops invading Ukraine, Space Force officials also fielded questions this weak about preparedness in the space and cyber domains, while an international agreement among a coalition of six nations was also announced. These stories, plus promotions from Space Command top brass to USSF active enlisted officers in this week’s roundup of Space Force news.

Top U.S. space officials this week issued some stern warnings on the probability that what is now being called the Russo-Ukrainian War will expand into the realms of space – and cyberspace.

Speaking at the Defense and Intelligence Space Conference organized by the National Security Space Association (NSSA), National Reconnaissance Office Director Hon. Dr. Christopher Scolese advised, “Ensure that your systems are secure and that you’re watching them very closely because we know that the Russians are effective cyber actors. It’s hard to say how far their reach is going to go in order to achieve their objectives, but it’s better to be prepared than surprised.”

GPS electronic warfare platforms have long been the assumed point for a cyberattack from an outside force. Said Dr. Scolese, “I think it’s fair to assume that to the extent that [Russian forces] can and to the extent that they feel it won’t extend the conflict out of their control, that they will extend it into space. You can imagine they’re already doing GPS jamming, for example, […] against Ukraine.”

Scolese sees the Russian invasion of Ukraine as a way of demonstrating the integration of U.S. military and intelligence resources, a key underlying vision of the Space Force: “What we do in space and our technology and our partnerships are really coming to bear, and it’s going to show how we work together as a community to achieve some very significant objectives and to understand what’s going on in the world.” Sources: NSSA official, C4ISRnet.

Announced at the NSSA Defense and Intelligence Space Conference was the naming of Claire Leon to the position of SSC Space Systems Integration Office director. Speaking at the NSSA event was SSC commander Lt. Gen. Michael Guetlein, who made the informal announcement.

Emphasizing that the SSC is continuing to seek a “unity of effort” among the disparate military and intelligence groups which differing commands and interests in space, Lt. Gen. Guetlein stated that Leon’s newly-created position would be to “do horizontal integration across systems to make sure that we’re actually delivering capabilities.”

According to Lt. Gen. Guetlein, the first initiative to tackle is the integration of missile warning and missile tracking satellites which are overseen by different agencies: “I have never seen greater collaboration amongst those organizations in my career prior to standing up a program integration council.”

Lt. Gen. Guetlein also stated that 2026 had been set as a goal for SSC to deliver on new technologies to strengthen US satellite resilience and that “the only way we’re going to get this done by 2026 is by maximizing the capability that we already have. That means we got to squeeze every bit of juice out of the systems that we have today.” Source: Space News.

The official announcement of promotions noted that “The Line of the Space Force competitive categories are space operations (LSF-S), information warfare (LSF-I), and force modernization (LSF-F). Promotion boards to lieutenant colonel were not held for the information warfare and force modernization categories as the eligible officers in the promotion zone met an Air Force promotion board in March 2021 prior to their transfer to the Space Force.”

The DARC program will develop, test, and ultimately getting running all-weather ground-based radar to monitor the “highly dynamic and rapidly evolving geosynchronous orbital environment critical to national and global security,” as described by Northrop Grumman vice president of integrated national systems Pablo Pezzimenti upon the announcement.

“While current ground-based systems operate at night and can be impacted by weather conditions, DARC will provide an all-weather, 24/7 capability to monitor the highly dynamic and rapidly evolving geosynchronous orbital environment critical to national and global security,” Pezzimenti said.

This contract is planned as the first of three phases to get such a DARC radar system established by 2025. Sources: Northrop Grunman PR, Defense Post, GovConWire.

The United States, together with Australia, Canada, France, Germany, New Zealand and the United Kingdom jointly released the Combined Space Operations (CSpO) Vision 2031 on Tuesday, February 22. CSpO is described as “an initiative to address the overarching need to encourage responsible use of space, recognizing challenges to space sustainability, threats presented by technological advances, and the increasingly comprehensive and aggressive counterspace programs of other nation-states. The “CSpO Vision 2031” outlines the initiative’s overarching purpose and highlights its guiding principles, including: freedom of use of space, responsible and sustainable use of space, partnering while recognizing sovereignty, and upholding international law.”

CSpO involves a list of “lines of effort”, which include:

Four objectives are at the heart of CSpO:

“Through the sharing of intelligence, information, and training with allies and partners, we can be greater than the sum of our parts in our joint pursuit for a safe and secure space domain,” said Air Vice-Marshal Harvey Smyth, director of the British Ministry of Defense’s Space Directorate. Sources: Air Force Magazine, Breaking Defense, Space Force official site, UK government official site.